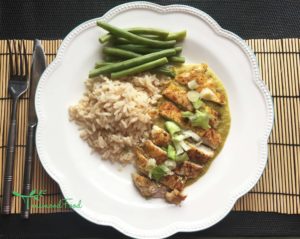 I bought some Katsu chicken off a food truck recently, which inspired me to make my own version. I particularly like this version because it is healthier than the more traditional recipe and suitable to eat as a family, my kids loved it. I haven’t eaten a lot of Japanese cuisine. The only other time I had some  Japanese food was in a Japanese restaurant in London. I can’t remember what the dish was called, but it was chicken thigh meat in a tasty sauce. But I don’t like thigh meat, so would not choose this again.

I also remember having a green tea ice cream, which had the type of flavour which you initially didn’t like, but something compelled you to taste some more until it was all gone. I wish I hadn’t though as I got a terrible migraine the next day, which I suspect was the caffeine in the green tea ice cream, I am sensitive to caffeine so try to only have it in small amounts, I promise I had no alcohol that evening :). So all in all my first impressions of Japanese food was not all that great. However, I loved the Chicken Katsu I bought and I would like to experiment a bit more with Japanese food because I think it contains a lot of interesting flavours.

This Chicken Katsu recipe uses chicken breast and is suitable for the whole family. Katsu Chicken is a type of Japanese breaded chicken.  The word ‘Katsu’ meaning cutlet in Japanese refers to meat that’s been pounded thin before being cooked. The chicken is floured and put in egg and Panko breadcrumbs before being deep fried.

In this recipe, I have replaced the Panko breadcrumbs with seeded brown bread but toasted it in the toaster first to give it an extra crunch. I shallow fried it with a little olive oil, instead of deep frying and used whole grain toasted breadcrumbs instead of panko breadcrumbs, which I thought worked really well. I also adapted the sauce and added some avocado for an extra nutritional boost. You could also bake the chicken in the oven if you prefer, but I find it dries the chicken out a bit too much and the flavour isn’t as good.

If you like a hotter version you can add some more chilli flakes to make a hotter sauce, but this was just the right amount of heat so that my kids could eat it too.

I served this with brown wholegrain rice and green beans, but this would also work well with a lower carb cauliflower rice, or with some seasonal veg or salad on the side without the rice.

Do you have a version of Katsu chicken? I would love to hear about it, please leave a comment below.

a pinch of chilli flakes 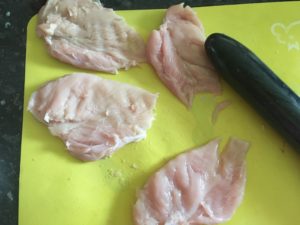 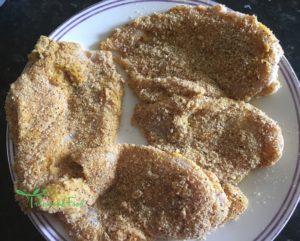 Place the chopped spring onions on top. Enjoy with salad, rice or vegetables or cauliflower rice. 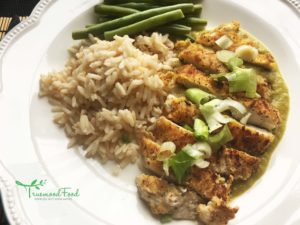 This Recipe was adapted from SortedFood

« Why Does The Weather Have Such An Effect On Our Mood?
Eating Rhubarb Could Help Alzheimer’s Disease »