Better Than a Cup of Coffee ‘Toasted Coconut Coffee Smoothie’ 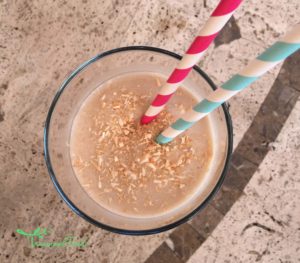 I love this silky creamy smoothie, it tastes a bit like rum and raisin ice cream to me, which is rather odd considering there is not an ounce of rum and raisin in it. But it has a lovely subtle light flavour, with only a hint of a coffee taste, and perfect for the summer months to get a bit of a coffee hit without the heat. If you want to reduce your caffeine intake then a decaf coffee works just as well.

For a long time coffee has been demonised as being bad for us, and too much caffeine in coffee is thought to have a dehydrating effect. However, coffee in the right amounts can actually be good for us.

One study showed that coffee could improve physical endurance, cognitive function, and improve mood, low to moderate coffee consumption gave the best results, with 0.3-4 cups of brewed coffee being the optimum amount. Above this amount, caffeine is thought to have a more dehydrating effect.

FSA advice (2007) states: ‘Drinks that contain caffeine (such as tea, coffee and cola) can act as diuretics, which means they can make your body lose greater volumes of water than usual. So these drinks can lead to an increased need for water or other fluids that don’t have a diuretic effect’.

However, by keeping coffee consumption to a low to moderate level, it appears that any dehydration effect would be minimal.

This recipe only has 1/2 cup of coffee in it, so will help enhance mood, make you feel more alert and with the addition of potassium rich banana will also give you more energy.  Flaxseeds are optional but will add some heart-healthy omega 3’s and some fibre, so worth putting in.

For best results, you do need to freeze the coffee into ice cube trays before you do this, and at the same time you can slice the banana and put it into the freezer.

Dry fry the desiccated coconut for a couple of minutes being careful not to burn and set it to one side.

Add all the other ingredients together in a blender, add sweetener, like honey if you like it a little sweeter,  top with the toasted coconut and enjoy on a warm summers day or in the winter to remind you of a summer that’s past. 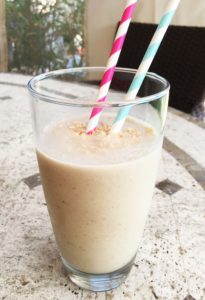 (This recipe was adapted from http://www.kitchentreaty.com/toasted-coconut-coffee-smoothie/#)