How To Make Cashew Nut Milk

I chose to make Cashew Nut Milk instead of other nuts for this recipe because I like the creaminess the cashews add to this nut milk, and I do love cashew nuts.  You could of course use almonds which would also work well.

Many people are looking for alternatives to cows milk and there are a number of different kinds of milk on the market including almond, soya, coconut, rice milk, hazelnut, and oat milk and cashew milk. Depending on where you live, you may have many more available options.

I have tried all the other milks and of all of them, I probably favour coconut milk and oat milk, although some brands have started to mix their coconut milk with rice milk which I don’t like as much. But you should try a few to see what works best for you. Almond and hazelnut milk has the creaminess of cows milk, and rice milk has a thinner consistency.

The bought cashew nut milk did not seem as creamy as my homemade version, but I still liked the taste. The Homemade Cashew Nut Milk tasted fresher, and overall had a better flavour, the consistency and colour looked the same for both milks.

If I had the time, I would opt to make my own, otherwise, the bought version would be a good alternative, the homemade version can last around 3-4 days in the fridge, whereas the shop bought lasts about 5 days.

I like Rude health’s cashew nut milk because it contains no thickeners and is organic.

Cashews like Almonds are particularly nutritious and very versatile. Used in both sweet and savoury dishes, they often add a creaminess to a dish once blended and add a delicate crunch when left in their raw state.

Native to Brazil, they are the number one crop in the world after almonds and cultivated in more than 30 countries.

What makes them nutritious?

They contain many minerals such as copper, which are good for the prevention of free radicals in the body and they also contain Magnesium which works with copper to provide bone strength. Magnesium itself also has many benefits being helpful to calm you down if you are stressed or suffer from anxiety and helping tired muscles recover after exercise.

So If you would like to try a new milk and fancy making your own, here is a quick and easy recipe for you to try. 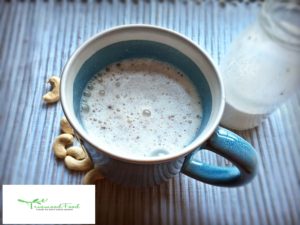 « The Food Of Love
Brain Foods »