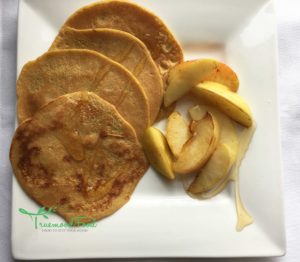 I recently discovered that pancakes may actually have been eaten by Otzi the Ice Man. I was fascinated learning about Otzi. Who if you don’t know was the Neolithic man they found buried in 1991 the Italian Alps and was uncovered when some of the ice melted?

Researchers were able to determine a wealth of information about how he might have died and even analyse the contents of his stomach to see what he had eaten.
His last meals along with deer and ibex were an ancient form of grain called ‘Einkorn Wheat’. The bits of charcoal that he consumed suggested that it was in the form of a pancake cooked over an open fire. I am not sure how they could determine that he was cooking pancakes from the charcoal, but I am happy to blindly go with that theory.
It’s almost odd to think of this Neolithic man sat by his fire flipping his pancakes. I think because pancakes for me have almost been associated with the US. American mums flipping pancakes for their children with maple syrup and bacon. I have never really got the bacon maple syrup combo, but then I don’t eat bacon.

Pancakes Have A Long History

Pancakes have been made through the ages. The Greeks and Romans ate theirs sweetened with honey. The Elizabethans used spices and rose-water with apples and sherry.
Shrove Tuesday or Pancake Day fell just before lent, so you could use up your eggs, milk and flour before you gave them up for lent.

Today, there are so many different recipes for pancakes. But for the most part, the traditional ones such as lemon and sugar, and maple syrup on a classic pancake stay true for a lot of people.

However, we have definitely seen a shift in recent years to more gluten-free, dairy-free, low sugar, healthier pancakes, with more of a focus on packing as much nutrient dense goodness into every single bite.

So what is the best option? should you go with the simple yet tasty pancake where you know what you are getting, and does not take too much effort.

Perhaps instead you should go for the ultra healthy pancake where you will be so bursting with energy that you will be able to flip pancakes till midnight.

I think the answer is to go with whatever suits your lifestyle, and how health conscious you want to be. But choosing a pancake that goes somewhere in between the ultra healthy, but easy to make and not overly complicated seems like a good option.
I decided to put together these Elizabethan pancakes with a hint of the Romans (honey). Apples, cinnamon, spelt flour, ginger and ale. So a little more decadent than your usual lemon and sugar. I have used dairy free milk in mine, but you can use normal milk as well, and one of the more ancient grains, spelt flour, which is easier for some people to digest than normal white flour, but of course you could use gluten-free flour or a wholemeal flour if you wish.

I have taken my inspiration from this 16th Century recipe book from http://www.bl.uk/learning/timeline/item103037.html which was transcribed below:

A recipe for pancakes and puddings from the 16th Century (please try and ignore the spelling, this is actually how it was written back then)

‘And take a frying pan and a dish of sweet Butter in it, when it is molten put handsomely in your pan halfe a spoonful of your stuffe, and so bestows the rest after, frye them on a soft fire, and turn them when time is, lay thé in a platter, and cast sugar on them. To make Pancakes Take new thicke Creame a pine, foure or five yolks of egs, a good handful of flower and two or three spoonefuls of ale, strain them together into a faire platter, and season it with a good handfull of sugar, a spooneful of synamon, and a little Ginger: then take a friing pan, and put in a litle peece of Butter, as big as your thumbe, and when it is molten brown, cast it out of your pan, and with a ladle put to the further side of your pan some of your stuffe, and hold your pan …, so that your stuffe may run abroad over all the pan as thin as may be: then set it to the fire, and let the fyre be verie soft, and when the one side is baked, then turn the other, and bake them as dry as ye can without burning.’

Please see my version of an adapted Elizabethan pancake. It is a light pancake, with a hint of ginger and cinnamon, and tastes lovely with the apples and a squeeze of lemon on top. I have only added a little honey to mine, as I like to keep the fructose low, but if you like it a little sweeter then you could add more honey or use an alternative sweetener like stevia. 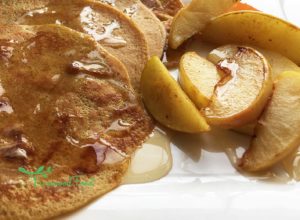 Add the flour to a mixing bowl, and slowly add the milk mixing well to get rid of any lumps, add the eggs, and the ale, ginger, cinnamon and the honey and mix well.
Leave in the fridge for about 1/2 an hour
Heat a thumb sized piece of butter or a dessertspoon of olive oil in a pancake pan or frying pan, once the fat starts to bubble, ladle some of the batter into the pan.
When all the mixture on top of the pancake looks like it has dried up, flip over and cook the other side.
Once all the pancakes have been cooked place in a warm oven to keep warm.
Slice your apples leaving the skin on (more fibre) and gently fry in the same pan as you cooked the pancakes, over a medium to low heat.
Once the apples are browned place with the hot pancakes and squeeze some lemon juice and a little honey if desired on top.

If you would like another recipe, you could try these delicious blueberry pancakes with mango and banana sauce see link below: